SYNOPSIS: The “Knightmares” storyline continues! Something -or someone -is forcing Batman to live through some of his darkest fears, amplifying the Dark Knight’s anxieties and reimagining some of his worst traumas. Now that Batman has become aware of the nature of these delusions, he must find a way to break through and find out the source of this disruption. So who does he turn to for answers? Why, the Question, of course! But is Vic Sage just another figment of the Caped Crusaders imagination? 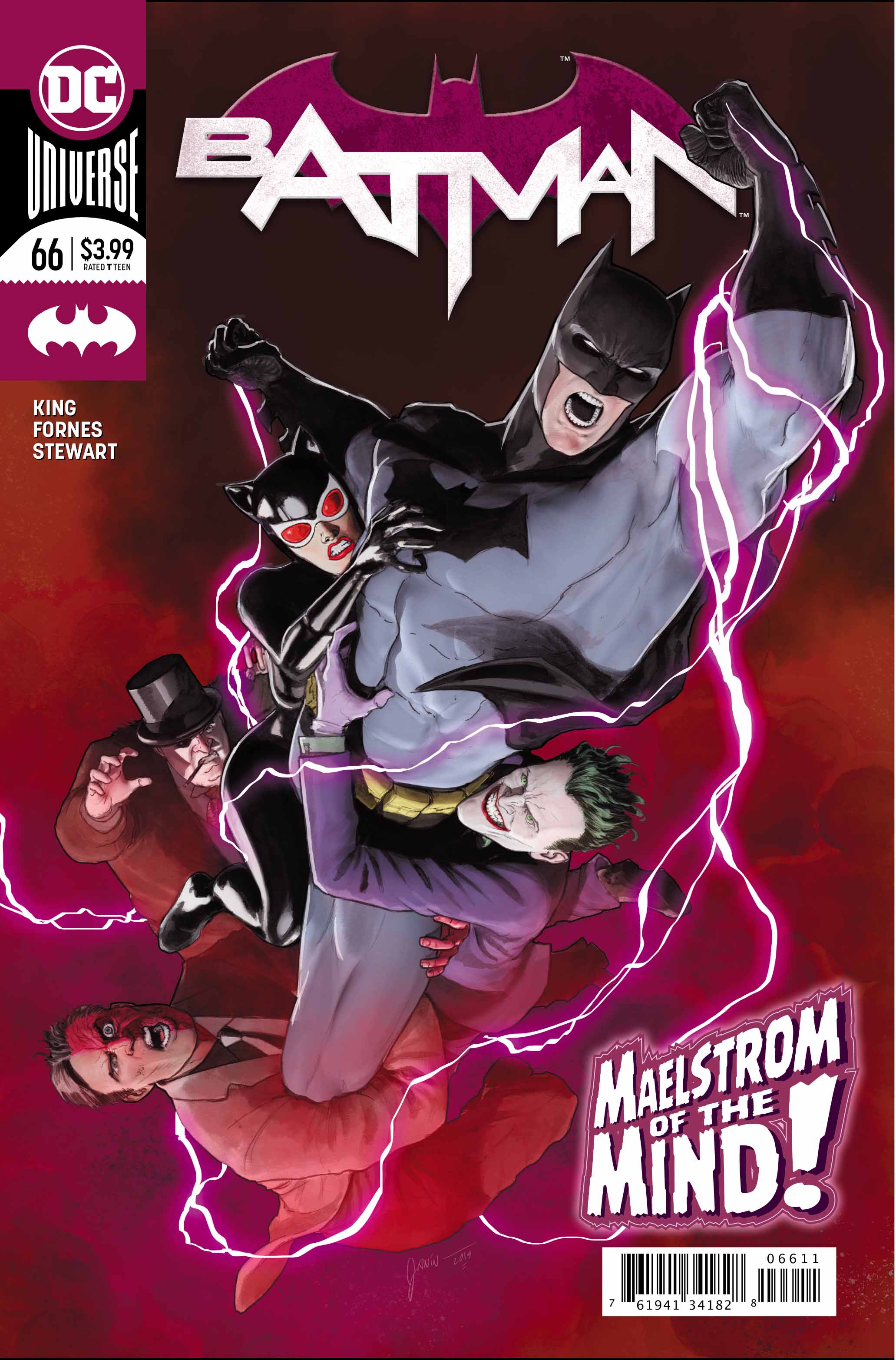 So answers Selina Kyle while being questioned by The Question as Tom King’s “Knightmares” resumes after a two-issue crossover with THE FLASH; as good as “The Price” was, BATMAN #66 makes me so, so glad King’s back.

Page after page, Selina tells her and Bruce’s history of clashes that became liaisons and later love. “I wasn’t ALL good, but he wasn’t anything BUT good. Sweat and leather. Bat and Cat. I liked how he held me, like he could do anything, but he couldn’t let go.”

She means every word. So… why did she go? That’s what The Question wants to know.

I balked at the wedding that never happened in issue #50 because I felt the reason Selina walked away was so clichéd. She couldn’t be with him because she decided a happy Bruce Wayne couldn’t be Batman? Hadn’t they already worked all of that out? I just didn’t believe it.

Neither, my friends, did Tom King.

And what King does in this issue is to ask Selina Kyle what SHE believes… and Selina Kyle believes in Batman.

This issue is one of THE greatest celebrations of Batman I’ve ever read, and King filters it all through Selina via observations and angles that are utterly true and beautifully new. I want to write 11 paragraphs alone about her take on Batman’s vow, but you need to savor it for yourself. (If you think the quotes I used earlier were too much to reveal in a review, please know I didn’t even scratch the surface of the impeccable writing you’ll read in this issue.) Because King isn’t just interrogating Selina via The Question. He’s putting his entire run on trial, and the last three words of his verdict in the final panel on the final page aren’t a wink. They’re an atom bomb.

One of my favorite Batman on film images is from BATMAN v SUPERMAN when Ben Affleck’s Bruce Wayne running headlong and heroically into the collapsing rubble, deadly dust, and impossible destruction of Metropolis without a costume or a single gadget. Artist Jorge Fornés does something here that moved me even more than that, so much so that I had to put the book down for a second and take a deep breath to process all the awesome. (The way it builds over two pages is masterful.) As Selina frames the way she sees Bruce through his adversaries and allies, Fornés and colorist Dave Stewart bring natural intimacy to every action and emotion. Much care is taken to make every skyline, night sky, and interaction unique. City scenes burst with detail and variety, while the interrogation scenes are pared down only to Selina, The Question, an ashtray, and a wooden table and chairs.

I still don’t know where or when we are. I have no idea what’s going on. Is all of this happening only in Bruce’s mind, which would render Selina’s words as what Bruce would want her to say rather than things actually being said? Did he conjure The Question just as he might have conjured John Constantine (in issue #63) as a way to put a face (or in the case of The Question, a lack of one) on what his beleaguered mind is battling to make sense of?

As he wrote on Twitter, “Ending of this one starts us on the path to the end of them all.” Indeed, BATMAN #66 is a love letter literally, figuratively, and in every other way in between.

Nolan: THE DARK KNIGHT TRILOGY Was Defined By It’s Villains