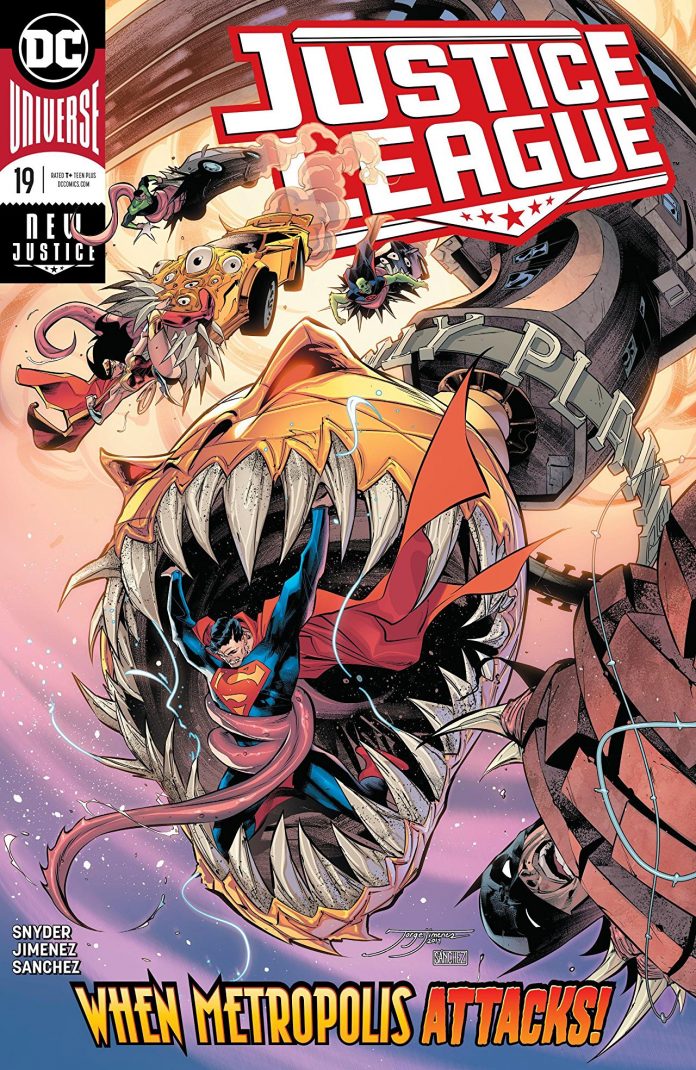 SYNOPSIS: “The Sixth Dimension” part one! At last, the Justice League has the map to the Sixth Dimension in hand-and with it, they have the key to saving the Multiverse from utter destruction! But things aren’t as simple as they seem, because they still need to get to the doorway-and to do that, they’ll have to go through the only being in all of existence who can get them there: Mr. Mxyzptlk!

Justice League #19 sees Superman, Batman, and Wonder Woman return to the forefront of the team and I, for one, am very happy about it.

Now, that’s not to say that I haven’t enjoyed the string of issues highlighting Hawkgirl, Martian Manhunter, Starman, and others, but there is a special feeling in seeing Superman as the focal point of the JL storytelling and presumably the narrative going forward.

The story opens with Clark, staring at a blank computer monitor, with other things on his mind than the story Perry has assigned him to write; those other things being the destruction of the Source Wall, the destruction of the multiverse, and how to keep all the destruction hidden from the world at large. Bruce calls him into action, letting him know that Martian Manhunter has sent out a signal to Mr. Mxyzptlk, with the League requesting the 5th Dimensional Imp’s help in healing all reality. Myx isn’t ready to play nice however, unleashing a distorted and magically manipulated version of Metropolis against the Justice League. Eventually the two sides come to an understanding, with Mxyzptlk sharing his knowledge of Perpetua’s impact on the dimensional realms and the fact that over the years he has imbued Superman with 5th Dimensional energy, leaving him the only one capable of crossing into the 6th dimension to discover a solution.

Scott Snyder shares the plotting duties with artist Jorge Jimenez and is the book’s writer, and he delivers a lot that works very well. Clark’s interactions with Perry, and later with Bruce, are made of classic super-stuff, rich in both character, charm, hope, and humor. The call back to their conversation opening the book is all the more powerful in its callback at the issue’s end in a different “light.” The use of Mr. Mxyzptlk is inspired here, serving up large scale spectacle action, humorous dialogue, and the pathway to a deeper understanding of his character and of the forces at work here. There are a couple of really nice Clark and Bruce moments that display both their differences in the character and friendship. The big reveal(s) at the end sticks its landing and will be sure to leave readers anxious for the next issue.

The art on the book is fantastic and Jimenez’s return is more than welcome. Jimenez’s uniquely energetic style is a fantastic match for Snyder’s words, handling gorgeous staging shots of the League just as well as surreal imagery and attacking skyscrapers with mouths full of teeth (yes, really.) He is able to produce scenes of bright shining glory as well as desolation and despair. The paneling and pacing don’t only move the story along but interact with characters to become illustrations on multiple levels. It is really top-notch work.

The issue has its share of missteps, however, and the result is a very good entry into the series instead of the greatness that seems to have been possible. The setup and execution of the League’s trapping and recruitment of Mr. Mxyzptlk is odd and confusing to the point that I’m certain I missed a necessary tie-in issue from another title. While fun, the action of Myx turning Metropolis against the League is ultimately rendered nothing more than filler pages that would have been better served as filler panels. While Myx does provide a small bit of additional info on the nature of Perpetua, Lex still refers to her as the “Mother of the Multiverse” which has been inconsistent in its application through the run.

Justice League #19 is a very good issue that should not be missed by anyone who is following the New Justice storyline, enjoys a good Superman & Co. story, or impressive comic book visuals. There are flaws here and there, but the good exceedingly outweighs the bad here. Highly recommended. – Garret Grev