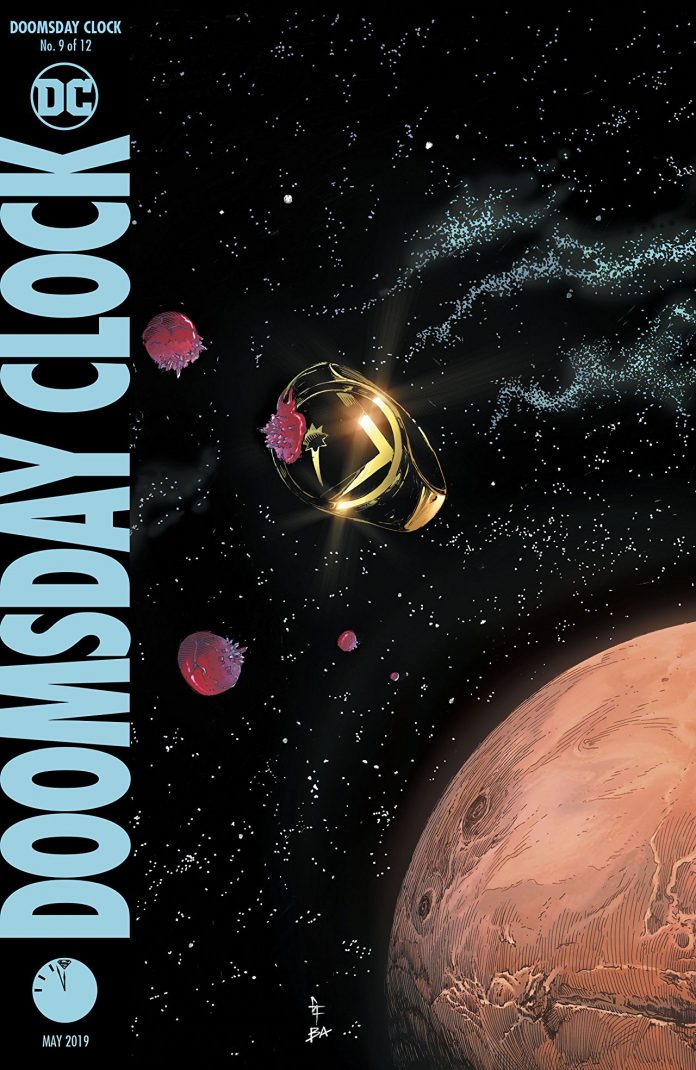 SYNOPSIS: The critically acclaimed series by master storytellers Geoff Johns and Gary Frank reaches its most shocking chapter yet when the DC Universe collides with its greatest threat: Dr. Manhattan. But nothing is hidden from Manhattan, and the secrets of the past, present and future will rock the very foundation of the DC Universe.

Chapter 4 of Watchmen, titled “Watchmaker”, is a dense, intelligent puzzle of a comic. Focusing on Dr. Manhattan, a.k.a. Jon Osterman, the issue jumps all over his personal timeline, giving us a glimpse of how the scientist perceives the world.

Doomsday Clock #9 is a successful sequel.

Months after a dramatic confrontation, big blue is once again jumping through time. Here, he takes us 100 years into the future, then back 70. Then forward 80, and so on.

Meanwhile, what seems like the entire DC Universe is headed toward him, and the red planet Mars. How appropriate. Notably absent from this trip are Superman (healing on Earth), Batman (also healing on Earth), and Wonder Woman (more on her in a second).

There’s a lot of dialogue and explaining going on, but the fallout is anything but positive. At the United Nations, Wonder Woman makes a plea for peace, concerning the metahuman debacle. Unfortunately, they are all interrupted by…

Oh, you’ll just have to read it instead.

This issue has a lot to offer. Given the fact it’s been a few months since the last chapter, it’s hard to remember how everything is connecting. However, Johns knows what he’s doing and you can bet this dense book will all come together by the end of issue #12. Characters have been introduced, plots are connecting, and (highly anticipated) confrontations are taking place. It’s taking a while to get there, but it’s all connecting.

Artist Gary Frank and colorist Brad Anderson continue their flawless record of making this DC’s most gorgeous-looking book. I can’t creatively come up with anything different than what I’ve been preaching about the previous 8 issues. Characters are detailed. Settings are appropriately mixed between light and dark. The action is clear and impactful. Every panel — and there are a lot of them — are frame-worthy.

Perhaps the biggest story of Doomsday Clock is its frustrating delays. By now, you’re either committed to seeing this through, or you’re waiting for the trade. Either way, this book won’t disappoint you. It’s dense, ambitious, engrossing and beautiful. Sure, delays don’t make anyone happy, but Johns and Frank are taking extra time to make sure this book is perfect. And with three issues left, I think it’s bound to end up that way. – Ryan Lower