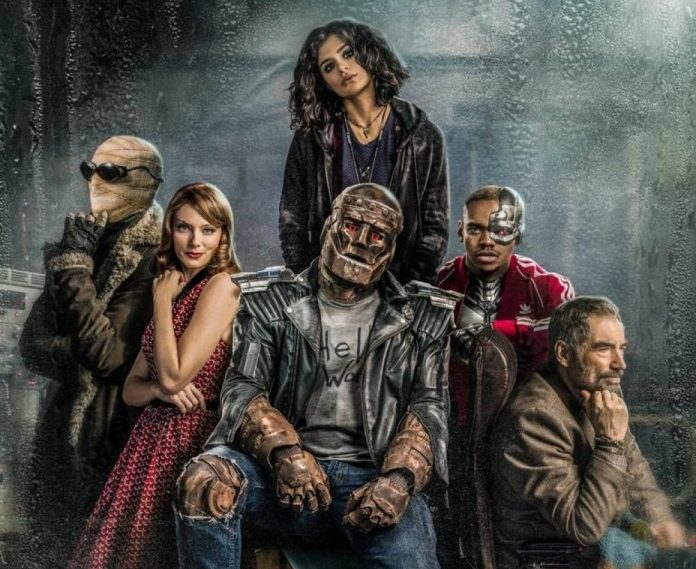 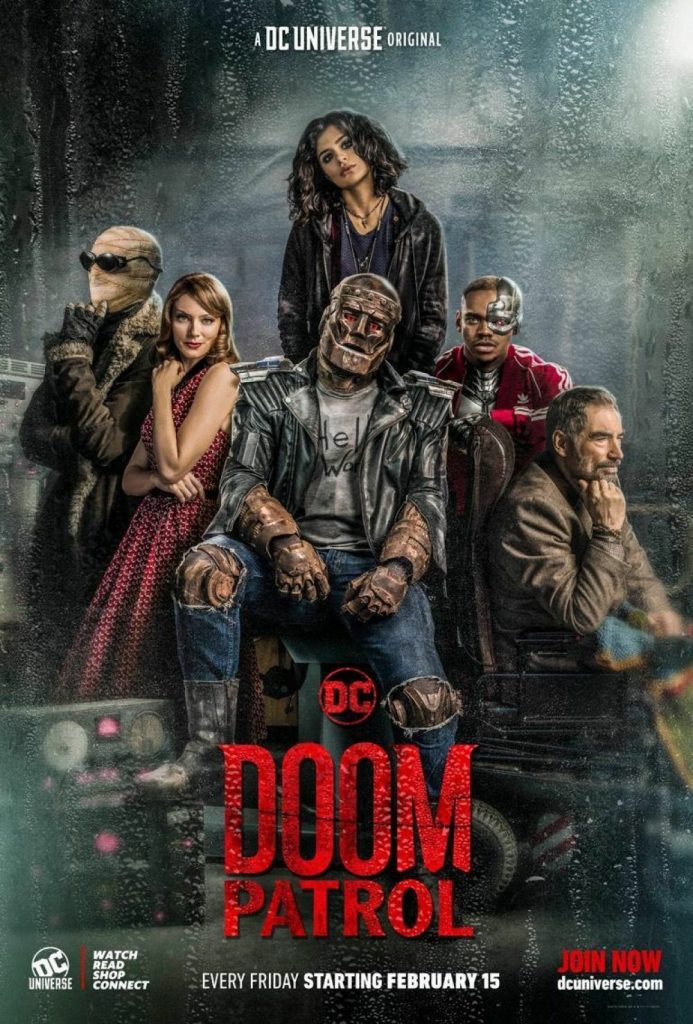 The DC Universe application opened with a bang at New York Comic-Con last October when it debuted the premiere of the first original show, TITANS.  I was lucky enough to be there covering it for Batman On Film (with fellow BOF correspondent Peter Verra) and the buzz surrounding the show was extremely positive.

Prior to seeing the first two episodes of TITANS, they had an unveiling of a few of their other programs:  One was the animated Harley Quinn show, and the other was DOOM PATROL.

I remember watching the trailer for it thinking that they were on to something different.  This wasn’t the typical superhero show we’ve seen on Netflix or the CW.  It wasn’t edgy like TITANS either.  It was, for lack of a better term, weird, but I was intrigued and I couldn’t wait for the show to begin.

From a basic human level, DOOM PATROL is a show about people who are different.   They all have struggles with appearance and self-esteem; but unlike the rest of us, there’s really nothing they can do to change any of it.  They are stuck in their situation by circumstances beyond their control and how they deal with it is what shapes the entire first season.

With that in mind, the writers take them on a journey where our reluctant heroes are not only fighting their own personal demons, but also some very interesting characters.  They come across a cockroach who thinks he’s a god, a donkey that farts words and swallows cities, and an agent who eats hair and gains powers from it.  If that’s not weird enough for you, they also come across a division of the government tasked with studying and stopping anything it considers abnormal, yet their facility is protected by flying butts who eat people.  And that’s just some of them.

Where the show shines is in the interpersonal relationships between the members of the Doom Patrol.  This is a ragtag group that was brought together by the Chief, an experimental doctor, who hasn’t been completely honest with his motivations for doing so.  When the Chief is abducted by Mr. Nobody, the team is forced to work together to find him, and in doing so, strong bonds develop between some of the members.  Cliff and Jane immediately have a connection, mostly due to Cliff losing his daughter and Jane having an abusive father.  Although Jane’s personalities are often extremely cruel, Cliff never waivers in trying to help her deal with her own reality.  Rita and Larry both struggle with a past that neither of them is particularly happy about, but their conditions force them into being confidants for each other.   Even the existing relationships bring out the best in the story.  When we meet Cyborg (Vic Stone), he and his father have more of a doctor-patient relationship than a father-son one, but only when Silas gives him his complete freedom does he realize how much his father was trying to protect him.   All of these interactions come together to form one, big dysfunctional family.  We even got some rat induced therapy so the group can try and sort everything out!

While we’re being entertained with the messed up lives of the characters, it’s important to remember that this show is still about superhuman people with superhuman abilities.  Whether it’s Cyborg’s arm cannon, Robotman’s super strength, Elasti-Girl’s ability to stretch her body, Larry’s unleashing of the Negative Spirit, or Jane picking the perfect personality for the right battle situation, these extraordinary people are able to put aside all of their personal problems and kick a little ass when the situation warrants it.  The episodes in Fuktopia and Nurnheim come to mind as two instances where the team gets to flex its muscle and show just what they can do when they’re focused.

And that’s the beauty of DOOM PATROL.  The show has a little something for everyone.  It’s a drama about flawed people who somehow find a way to rise above all of that when they need to.   No other superhero show on television dives this deep into the psyche of each character, but the weird show that’s narrated by the villain seems to accomplish all of that.  (Did I forget to mention the narrator also happens to be the villain?  Well, all the more reason for you to watch the show!) – Eric Holzman