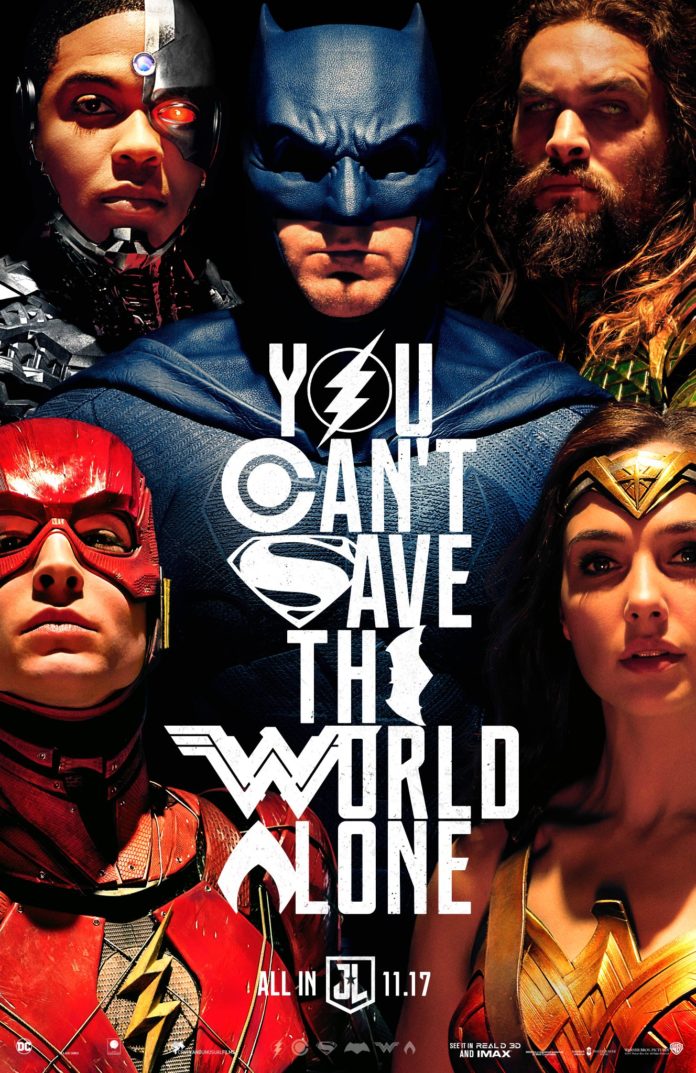 SYNOPSIS: Fueled by his restored faith in humanity and inspired by Superman’s selfless act, Bruce Wayne enlists the help of his newfound ally, Diana Prince, to face an even greater enemy. Together, Batman and Wonder Woman work quickly to find and recruit a team of metahumans to stand against this newly awakened threat. But despite the formation of this unprecedented league of heroes–Batman, Wonder Woman, Aquaman, Cyborg and The Flash–it may already be too late to save the planet from an assault of catastrophic proportions.

Let’s be brutally honest shall we? This film’s main appeal is that it’s the first time that six major DC Comics characters – Batman, (SPOILER ALERT!) Superman, Wonder Woman, The Flash, Aquaman, and Cyborg – have appeared together in a live-action film. That’s historic and cool, but it does not automatically make for a great, or even good, film. BUT…

Does it mean that JUSTICE LEAGUE is a bad movie?

Nope. JUSTICE LEAGUE is not a bad movie; but it’s not a good movie either.

JL is simply an “OK” movie.

The plot is thoroughly predictable: Batman/Bruce Wayne feels bad about, you know, for being an A-hole in BATMAN v SUPERMAN and trying to kill Superman and all. So he puts together a team of superheroes that he knows only from stolen computer files –sans Wonder Woman/Diana Prince – to save the Earth from a born to be wild alien called Steppenwolf (created by some suspect CGI), and his army of flying monkeys from THE WIZARD OF OZ, AKA “parademons.” Along the way, Batman becomes Dr. Frankenstein while The Flash and Cyborg become Igor, and (SPOILER ALERT!) Superman is brought back to life! Why not let the “dead” rest in peace? Well, because, you know, Batman still feels bad about trying to kill him in the previous film and only Superman can save the world alone.

Ben Affleck summed it up best: “This film is an interesting product of two directors.”

It’s visually “Zack Snyder,” tonally “Joss Whedon,” and reeks of “made by committee” – take that for what you will. Also, it feels NOTHING like Snyder’s BATMAN v SUPERMAN (or any Snyder film for that matter) – which apparently is on purpose. It’s brighter, lighter, and more “fun.”

With the lack of plot, boring main villain, and bad CGI, one would think that JL is a total dumpster fire. Perhaps it could’ve been, but what saves JUSTICE LEAGUE and gets it to “OK” is the cast.

Gal Gadot is tremendous (again) as Wonder Woman. Her one “Wonder Woman scene” – Wonder Woman intervening in a bank heist – might be the best part of the entire film! In fact, while it’s Bruce Wayne who puts together the League, the movie itself feels like “Wonder Woman and Her Super Friends.” (I can’t wait for WONDER WOMAN 2!)

Ben Affleck looks great (again) in the suit as Batman, but there’s “something” missing in his performance this time around. I can’t quite put my finger on it…uninspired maybe? Yeah, I’ll go with that. Batman’s action scenes look awesome and cool, but let’s be honest here, that ain’t Ben Affleck – that’s a stuntman and/or CGI. I thought he was better as Bruce Wayne in BvS even though he’s a “better man” in JL. I’m talking about performance, not characterization.

(And please indulge me for just a moment to talk about Mr. Affleck’s Batman on film future – this site is “Batman on Film,” you know. I TRULY want him to return in the role for Matt Reeves’ THE BATMAN. However, if his performance in JL is an indication of what we’ll be getting in a solo film, well, no thanks. Here’s hoping that Mr. Affleck can get, um, inspired for THE BATMAN. If not, recast quite frankly. OK, rant over.)

Jason Momoa (who’s damn cool), Ezra Miller (who’s damn funny), and Ray Fisher all have their moments as Aquaman, The Flash, and Cyborg respectively. Like I said previously, it would be nice to have the chance to get to know them better as it probably would’ve allowed the audience to connect to them and the entire team as well. But alas, time and (bad) CGI action pieces do not allow this to happen. I do know that I want to see more of them…separately, that is.

As far as the rest of the cast, blink and you’ll miss Diane Lane as “MARTHA!” Kent, JK Simmons as Commissioner Gordon, Billy Crudup as Henry Allen, and Amber Heard as Mera. And except for being the “big gun,” Amy Adams is virtually wasted as Lois Lane. (One more rant: There better be another solo Superman movie with Henry Cavill and Amy Adams as Superman and Lois Lane. It’ll be a damn shame if not.)

Those fans of DC Comics who, as they say, have been waiting “all of their lives” for this movie will be happy with it – and in turn, I’m happy for them. Thank goodness all those changes that WB demanded worked – relatively speaking. I also wonder how the diehard fans of Zack Snyder – those who adored BATMAN v SUPERMAN – will receive this movie. The final product is definitely NOT what was originally intended.

As far as the general audience, they’ll like it better than BvS and SUICIDE SQUAD, but probably not as much as WONDER WOMAN. And it’s OK to bring the kiddos because this thing is FUN! (While my tongue was planted firmly in my cheek when I wrote that last sentence, I do think it’s OK for kids 10 and up.)

When it comes to me personally – as a fan – here goes…

Frankly, I absolutely did expect this movie to be a dumpster fire. However, I’m happy (and relieved) to say that I kinda enjoyed the 1 hour and 59 minutes I spent watching it. Now, does that mean that JUSTICE LEAGUE is a great movie and I want more DC films just like it? No (it unequivocally is NOT) and no (they’re focusing on solo films by talented filmmakers, thank goodness).

After YEARS of trying (JUSTICE LEAGUE: MORTAL anyone?), Warner Bros. and many fans finally got the Justice League movie they so desperately wished for. They didn’t get a good one, nor did they get a bad one. They got one that’s “just OK.”

THE BOTTOM LINE: Despite a very weak plot, lack of character development, crappy villain, and horrendous CGI, JUSTICE LEAGUE is a safe, somewhat fun, popcorn movie that’s frankly forgettable. There’s some really good, some really bad, and A LOT meh of in between. – Bill “Jett” Ramey