SYNOPSIS: From the burning world of Krypton to the bucolic fields of Kansas, the first chapter of SUPERMAN: YEAR ONE tracks Clark Kent’s youth in Kansas, as he comes to terms with his strange powers and struggles to find his place in our world. DC BLACK LABEL is proud to present the definitive origin of Superman as rendered by the legendary comics creators Frank Miller and John Romita Jr.! 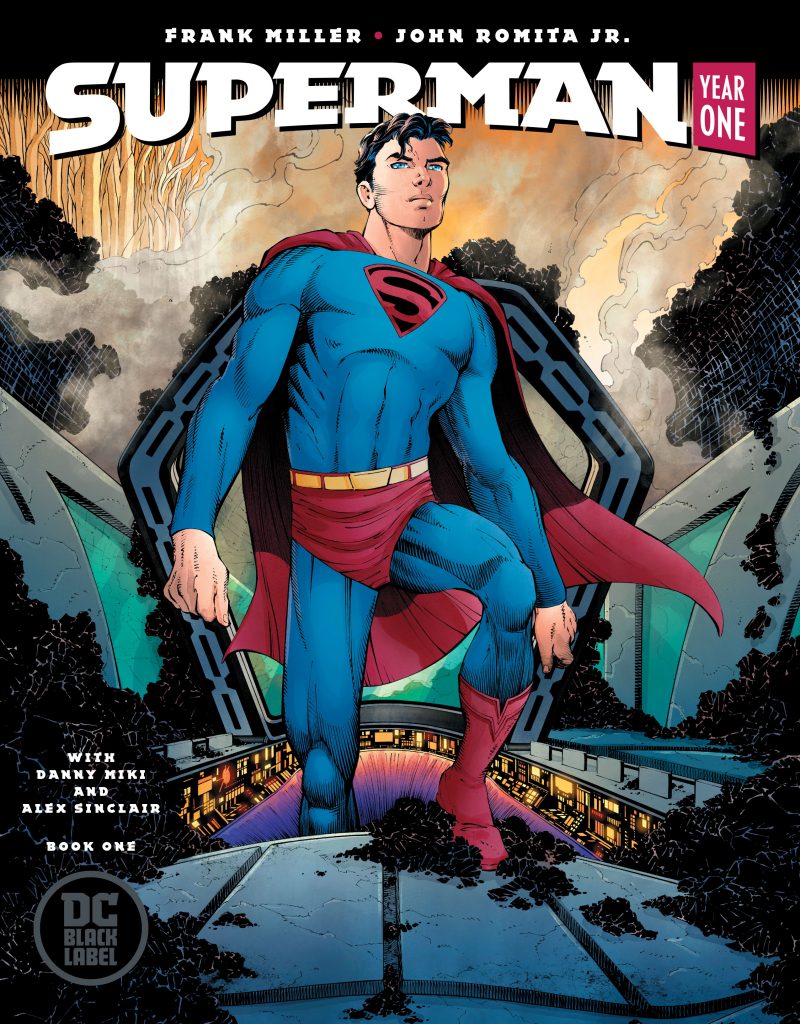 Frank Miller’s track record with the Man of Steel has been…spotty in the past, to say the least.

The most prominent work that the writer has featured the character in was his 1986 classic The Dark Knight Returns, which contorted arguably the most iconic and prototypical superhero into a symbol of illegitimate authority that served a sole purpose as an obstacle for Batman to overcome.

While I have issues with the distorted perceptions that book has created about Superman for the people who have only ever read that one comic book in their lives, ultimately that’s fine. After all, DKR is a Batman story. In fact, the majority of Miller’s work that has featured some kind of appearance from Superman is, primarily, restricted to Batman stories. DKR‘s two sequels feature some kind of Superman appearance, as does an issue of Miller and Jim Lee’s ill-fated All-Star Batman and Robin, the Boy Wonder.

Previously, the one sole Superman story Miller contributed to was as an artist, one of many in the feature story from the anniversary issue Superman (vol. 1) #400, written by Elliott S. Maggin.

So, given Miller’s prior uses of the Superman character, and the fact that he’s primarily known by both the initiated and uninitiated comic book reader for his reputation embracing harder-edged, darker, and sometimes overly gritty stories (that can border on camp in some cases), the idea of Miller writing Superman — even an alternate, non-DCU Superman — might be a little off-putting.

That’s where Superman: Year One comes in, giving the Man of Steel the DC Comics origin treatment that Miller himself defined along with artist David Mazzucchelli in 1987’s Batman: Year One. With a lot of question marks going into the first issue of Superman: Year One concerning Miller’s questionable capacity for the more optimistic attitude that the Man of Steel is primarily known for, doubt about the writer’s ability to represent the original superhero properly is only natural when considering his previous body of work.

Well, I started to become convinced by this first issue and its philosophy on young Clark Kent when his Pa was driving him to his first day of high school. Pa gave some classically sage wisdom, telling him he shouldn’t think he’s better than other people.

“I’m not better than anybody, I know that,” Clark says. “I’m just better at doing stuff.”

A strange wave of relief came over me.

In addition to being, perhaps, the most in-depth single-issue look at Clark’s childhood and adolescence in a good long while, there’s a downright shocking level of purity to this young Clark that I certainly wasn’t expecting as a jaded, outright doubter of Miller’s ability to represent Superman. Never have I been so delighted to be proven wrong, because not only does Clark show a pivotal amount of empathy for the people around him, but cruelty — in this case, depicted through the prism of Smallville High’s contingent of bullies — also baffles him and forces him not simply to stop it with power, but to alleviate the suffering of the bullies’ various victims.

That service was really appreciated, and Miller even managed to build up Clark’s eventual constitution concerning truth and justice in a way that surprised and charmed me. Still, Miller did manage to creep in a moment that was more traditionally “Miller,” but thankfully it was only a fleeting moment that gave way to a better scene about halfway through this book.

It didn’t take long, though, before this version of arguably the most oft-told origin story in the history of comics took a swerve that is unique. After Clark leaves Smallville, a lot of versions of the origin have him traveling the world in some way in order to get an education. A lot of versions of the origin have him go off to college. In 2004, Mark Waid chose for Clark to fly around the world and gain experiences in both tranquil and dangerous parts of the world firsthand, while more recent other media adaptations see him wander around aimlessly or just emerge instantaneously at age 30 wearing his iconic cape.

Miller’s solution to Clark’s pre-Superman world exploration is different, but it also has me a bit nervous, and that nervousness that I feel as a reader is actually also shared by at least one other character in the story. I don’t really want to divulge it because it’s a pretty major story beat, but suffice it to say that this has the potential to get the character to the same heroic destination via a very different narrative path. That’s definitely exciting, but also, strangely, philosophically concerning.

At times, it did feel like the writing was trying a little too hard in places to be folksy or relatable, but thankfully this sense was drowned out by the solid character work that the issue as a whole manages to accomplish. Still, issue #1 of Superman: Year One absolutely did its job. It showcased a version of the character that I, frankly, wasn’t sure Frank Miller was capable of portraying as a writer, but this is by far the most humanistic and tender single issue I have ever read that has Miller’s name at top billing.

Much of that feel, of course, has to do with the artistic team. John Romita, Jr. is no stranger to Superman, having worked on several issues of the character’s main comics title with both Geoff Johns and Gene Luen Yang. While some readers have maintained a strange obstinacy toward Romita’s tenure since going DC exclusive, the thing that I’ve always appreciated about his work is his ability to imbue everything he works on with the emotion that the work intends you to feel. Because of that, Superman: Year One #1 feels positively joyful in all the right places, due in no small part to Romita’s pencils punctuated by strong lines and a vibrant color palette.

I’m charmed, curious, and a little worried. None of these are bad things to feel after reading a number one issue. Beyond all of that, though, I’m relieved to be able to say that not only does Superman: Year One seem interesting, but it seems that the Last Son of Krypton is — thankfully — in good hands with this creative team.

Here’s hoping that the issues to come are just as truthful, yet unexpected as this one. – Chris Clow