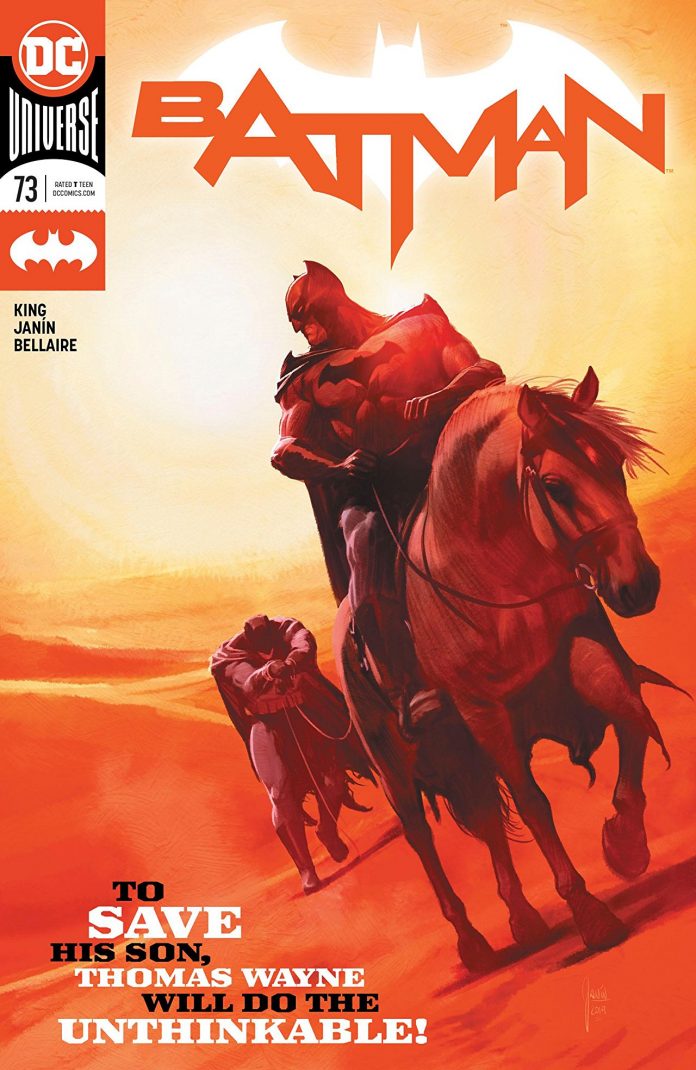 SYNOPSIS: “The Fall and the Fallen” part four! Batman has been defeated by Bane’s minions and chased out of Gotham. As a last-ditch effort to save his son from the lonely fate of being Batman, his father from another universe, Thomas Wayne, a.k.a. the Flashpoint Batman, is taking Bruce to the far ends of the Earth to try to give him the one thing that will cause him to give up crime-fighting for good.

The last time Bruce Wayne rode beneath a sweltering sun across the savage sands of the deadly desert that lies between civilization and Talia al Ghul’s kingdom of Khadym, his travel companion was his longtime lover and recent fiancée, Selina Kyle (in issues 33-35, collected in Vol. 5: The Rules of Engagement).

But that was so, so many miles and emotions ago.

After what seemed like the surest of things thudded to a heart-rending halt, Bruce (along with unlikely allies including Oswald Chesterfield Cobblepot) uncovered a conspiracy in which Bane was calling shots all across Gotham City from the bowels of Arkham Asylum (which, unlike the Alamo, actually has a basement). The Devil of Santa Prisca’s chief lieutenant in these shenanigans was none other than “Flashpoint” Thomas Wayne, another dimension’s Batman who helped Bane connect Bruce to a mind-melting machine that sends his psyche sailing through a series of hellish “Knightmares” that challenged everything he ever thought he knew, felt, wanted, and was.

When Batman busted out, he promised to bring his own army to Arkham to battle Bane’s. Instead, he punched Tim Drake in the face (after already having landed knuckles across Jim Gordon’s noggin), faced Bane alone, and apparently got his back broken again. I guess. I think.

It’s been a while since we’ve been able to know with confidence when or where we are in these pages, and writer Tom King likes it that way. I do, too, though I understand why some of you are losing your patience. I know many readers felt the “Knightmares” issues dragged on too long, and the two-part crossover with THE FLASH that punctuated them didn’t help matters much. On the other hand, there’s not a single “Knightmares” issue that I don’t consider a modern classic.

Keeping with recent tradition, BATMAN #73 offers no resolutions. It begins with Thomas Wayne (wearing his own version of desert Bat-gear) riding across those same savage sands, his son’s limp body draped across the back of a saddle attached to ropes that are dragging a coffin. If you’re wondering whom the coffin is for, you’re asking the wrong question.

On and on they ride, as Thomas sings “Home on the Range.” Ninjas attack, but they’re no match for Batman’s dad (who, in his mind, is The Batman). Are they the League of Assassins? Not quite. (Same clan, different vintage.) And when Bruce eventually regains consciousness, he asks Thomas if this is a dream.

“Yes, son,” Thomas answers through a sun-baked smile. “But not yours.”

It’s not hard to guess what Thomas wants. It’s easy to figure out the “where” and the “why.” But, as always, the devil’s in the details, or, in this case, the dialogue. Thomas’s words to Bruce are firm but fatherly. His goal is all about family.

And he’s also way, way out of his Bat-damn mind.

Joëlle Jones drew this book’s previous trip to Khadym in a stunning display of magnificently memorable artistic majesty. Mikel Janín takes the reins this time, recreating the feel of Jones’s desert vistas beneath his instantly recognizable, uniquely handsome characters. From Bruce’s stubble and stupefied reactions to the warm, weathered lines around Thomas’s smile and eyes, Janín is equally comfortable giving us familial intimacy and what-the-fudge impossibility, sometimes in the same frame. The jagged layout of an action sequence yields palpable violence and electric energy.

From pink- and purple-hued dusks to orange, yellow, and reddish afternoons, Jordie Bellaire’s colors give the imagery a dreamy sense of depth. She colored “The Rules of Engagement,” too, and she’s the secret sauce that brings these stories together. Her skies go right up to the edge of being surreal, which is perfect for this story, and she adeptly makes a nighttime campfire feel warm and inviting as it puts out just enough heat and light to keep shadows at bay. She’s a master.

Once again, don’t expect Bane’s defeat or Bat’s reunion with Cat or anything else resembling an end to the madness King’s meting out. In fact, this issue promises that Bruce Wayne’s situation is only getting weirder and worse.

As usual, I’m here for it. – John Bierly