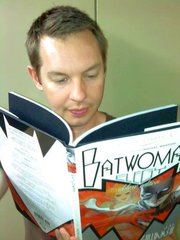 His favorite things are people, music, cooking, eating, movies, adventures, and afternoons when you can see the moon.

He drinks enough Mountain Dew to kill a dinosaur. He’d like to get a job reading books on tape.

His five favorite movies are Rushmore, Batman Begins, Pee-wee’s Big Adventure, Raiders of the Lost Ark, and The Empire Strikes Back.

He’d like to be Steve Martin when I grow up. And Bill Murray. And Luke Skywalker. He like to end sentences with prepositions.

Check out JOHNBIERLY.COM to read about the other things he writes about. You can follow John on Twitter at @JOHNBIERLY.