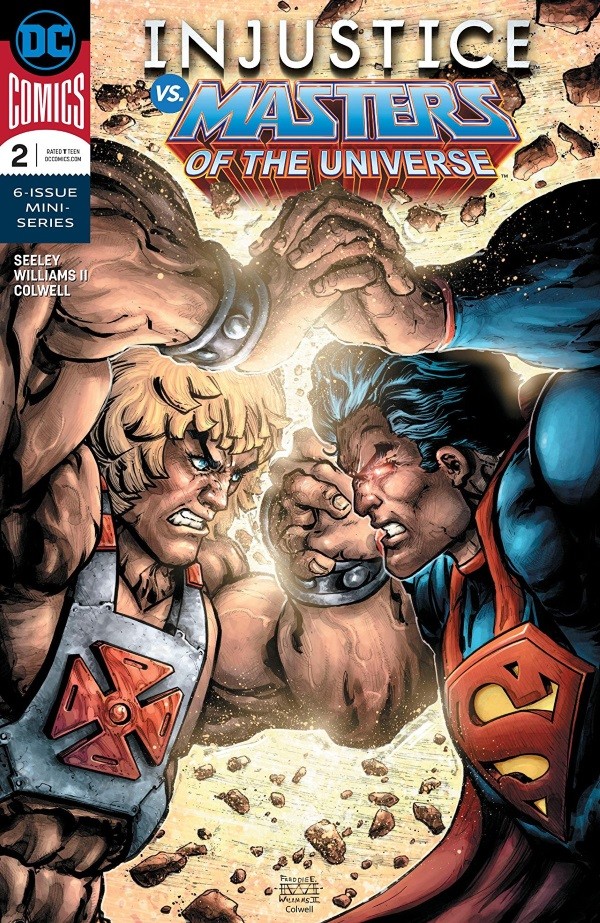 SYNOPSIS: He-Man has come to his mother’s home-world to save it from a despotic ruler: Superman! As Batman plans an invasion of the Oracle to stop their suicide squads from terrorizing the populace, He-Man wanders an Earth city (in disguise) hoping to understand more of the difficulty they’ll face. Meanwhile, back on Eternia, Zatanna and Swamp Thing are horrified to discover that someone else from their universe has crossed over!

DC’s Injustice vs. Masters of the Universe is fun. It’s actually more than just fun; it takes something that seems like it should be corny and paper thin, and makes it an engaging and thought provoking take on the characters…well some of the characters.

Issue number two opens with Captain Hawke, Stratos’s sister, patrolling the skies of Eternia. She and Stratos discuss He-Man’s departure to Earth with the non-Bruce Wayne Batman and his resistance fighters. Suddenly the sky breaks open and Steppenwolf opens attack along with Darkseid’s forces just as her communication line is cut off. Apokoplis’s army has seemingly begun its invasion of Eternia.

On Earth, the new Batman lays out his plan for He-Man to take on Superman and provide a permanent end to the conflict that has engulfed the DC Injustice universe. It turns out that He-Man is uniquely suited for the battle, not only due to his magical nature and belief that those with power should use it to protect freedom, but also because Superman is apparently totally unaware of his existence. Because Superman is unaware of He-Man, New Batman believes that the Kryptech armor Superman’s army utilizes won’t be effective toward The Most Powerful Man in the Universe, meaning he will have an edge in battle and also be immune to the Kryptech’s mind-controlling abilities. The plan is to break into Superman’s home base, the Black Oracle, using the Kryptech armor, and defeat him.

He-Man decides that he needs to see Earth on his own. Along with Orko, he magically dons a ridiculous hipster disguise and strikes out on a tour of Metropolis. While on his tour of the desolate city, He-Man saves a girl named Regina Taylor, both from a suicide attempt and Bane and Copperhead who are under Superman’s mind-control via the previously mentioned Kryptech armor suits.

Meanwhile on Eternia, we see the further impact of Darkseid’s forces on Eternia. Granny Goodness breaks Evilynn and the rest of the Evil Warrior’s out of prison, for reasons yet unknown. The Heroic Warriors travel with the remaining DC resistance forces to the same prison Skeletor’s minions have just been broken out of, only to find it completely wiped off the planet. The heroes determine the devastation is a result of Darkseid’s antimatter and Man-at-Arms declares that they need to travel to Castle Grayskull.

Back on Earth, we see Superman, Wonder Woman, and the original mind-controlled Batman getting word that Bane and Copperhead have been defeated. Skeletor approaches and tells Superman he lives only to follow his commands, adding that he will continue searching for magical items that could be used against the Man of Steel by the resistance. As Skeletor departs he overhears Wonder Woman express her dislike for him but saying that he is still useful, despite his pathetic nature. Skeletor is disdainful of her assessment and vows that he will stop at nothing to regain his former power. He reaches into his magic scrying pool and produces what appears to be his half of the Power Sword.

At the New Batman’s resistance headquarters, he and Teela have a heated exchange regarding He-Man’s disappearance. Just as tensions are about to reach their breaking point, He-Man returns with Orko, wearing Bane’s kryptech suit and announcing that he has a plan.

Issue two of this series moves swiftly, jumping right into the action from the first panel. While the first issues was weighed down with the laborious task of laying out the convoluted backstory for both franchises, writer Tim Seely now is able to focus more narrowly on the specific story being told in these pages. The different storylines are handled well with a balanced approach to each group of characters in play here. There is plenty of DC and MOTU content for fans of either property, and again he does a valiant job giving this series reason to exist.

The characters as individuals do not fare as well. There is plenty of story development, and some really cool appearances such as MOTU toy fan-favorite Battle Bones, however the only real character work on display is centered on He-Man. That said, the work done is wonderfully. Injustice vs. Masters of the Universe continues to give the character validity in the story, posing him in direct opposition to this version of Superman. For all intents and purposes, He-Man fills in for the classic Last Son of Krypton as the beacon of hope and light. The section where He-Man saves Regina Taylor from her attempt to take her own life is particularly strong and seems to purposefully call back to Grant Morrison’s All Star Superman #10. It’s wonderful.

RELATED: INJUSTICE VS. MASTERS OF THE UNIVERSE #1 Review

It is He-Man who also allows the reader to understand Injustice’s version of Superman a bit more. New Batman has filled him in on Superman’s dual identity as reporter Clark Kent. It is He-Man who cannot seem to reconcile a mild-mannered truth seeker seeking to hold the entire planet under his murderous control, while New Batman explains that this Superman has not been Clark for a long time.

The other strong character moment is delivered by Teela, yet again is focused on He-Man. When New Batman is angry that He-Man had wandered off on his own, Teela explains that while He-Man appears to be a “savage warrior god,” he is in fact just a teenage boy that was forced to grow up to early, adding that New Batman would never be able to understand. While the identity of New Batman has not been revealed, this bit of dialogue seems to be an ironic hint at that character’s backstory and leads me to believe that we again are seeing a former Robin take up the bat-mantle.

For all the story’s uneven approach to character development, the book does not suffer. It is apparent that Seely is focused on telling a He-Man story, set within the world of Injustice. There is clearly a lot of story left to tell and that focus may easily change. The focus on He-Man may be a necessary one simply by the work that has set this world up. Superman is one dimensional in his mission and new persona in the Injustice universe, the original Batman is a pawn lacking freewill, and we are watching He-Man in his quest to right wrongs and bring about justice, even as New Batman seems to want him to only play the role of soldier, and likely super-assassin, in his plan.

The artwork here is again remarkable. Freddie Williams II’s cartoonish approach shines with it’s larger-than-life visuals and hulking figures. He and colorist Jerry Colwell have created a visual style that is a bit messy, a bit overdone, but perfect for this story. There is a deep chalkiness to the colors that is unique and powerful. I can’t say I’ve seen anything like it before. The only minor complaint here is that the visuals don’t quite align with the story telling during He-Man’s disguised sightseeing expedition through Metropolis, leading to a bit of confusion.

I highly recommend this book for fans of either property. As I said in my review of issue #1, this could have easily been a nostalgia fueled cash grab, but these creators are giving the subject matter real substance, if focused squarely on the broad shoulders of He-Man. I’m hoping we see this focus expand to other characters as the series progresses. – Garret Grev

Garret Grev is a longtime reader of BOF and a life long Bat-fan. Garret lives in Minnesota with his lovely wife and three sons (who may or may not all be named after his favorite Bat-actors.)   Outside of Batman and comics, Garret loves the outdoors, playing music, collecting 80’s action figures, and the Minnesota Vikings.  Garret is the co-founder and co-host of the fantasy football site, What Are the Odds? and its associated podcast.

What Crime Will Batman Investigate in THE BATMAN?