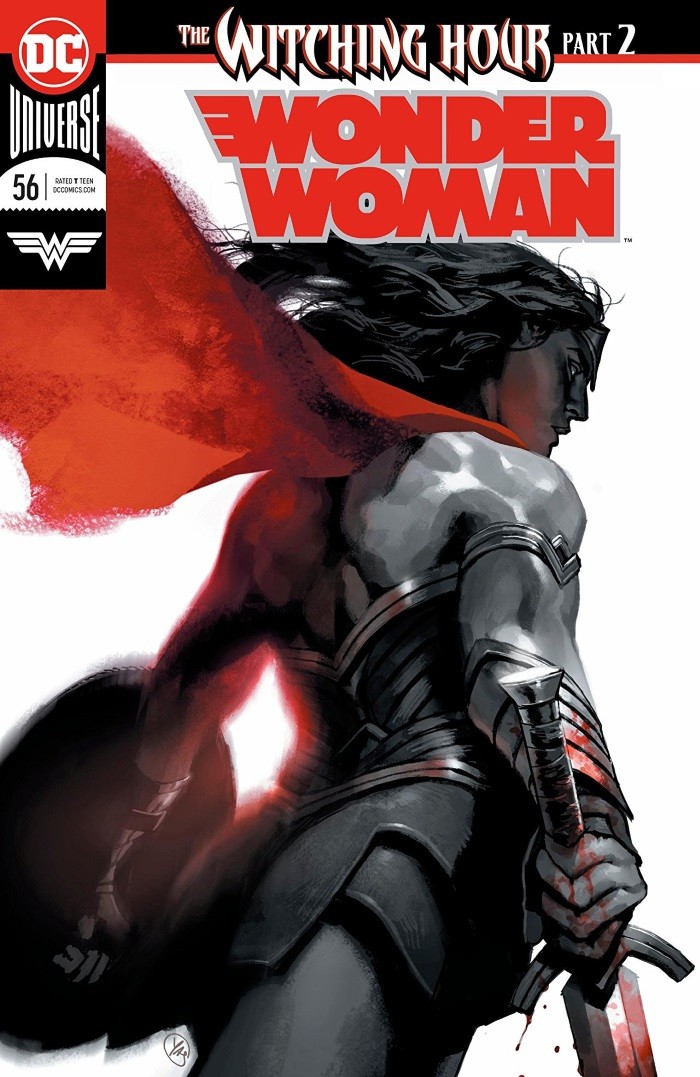 SYNOPSIS: “The Witching Hour” part two! The Justice League Dark barely escaped their first encounter with Hecate, but they know she’ll be coming back for the power inside Wonder Woman. But what if Diana could tap into that power herself to take on Hecate directly?

Wonder Woman is on a quest to put an end to Hecate!

(And I bet you aren’t going to care very much.)

Writer James Tynion IV ushers us into “The Witching Hour, Part 2”: a story arc that continues to offer glaring problems that only compound upon themselves in this issue.

To begin, most of the main characters are truly being misused (there’s an awful lot of standing and sitting around going on in this issue) and the central villain of the story, Hecate, only makes an appearance in a convoluted backstory.  Circe, Deadman, and Manitou Dawn are also brought into the mix, but their sudden appearance feels suspiciously like a plot device; and with the existing characters doing the bare minimum (if that), it seems like an unnecessary waste to bring in new faces.  A tighter, more organic structure would have found Zatanna, Swamp Thing, Constantine, Man-Bat, or Detective Chimp executing the tasks these new characters are performing.

Diana also seems to be acting out of character in this issue.  Though I understand that she’s afraid of what is happening to her, she acts out of impulsivity and arrogance.  At one point when Zatanna is trying to offer her advice, Wonder Woman declares “I’m DONE listening,” and stomps away in a huff.  To me, Wonder Woman has always been the voice of reason and wisdom, and rarely acts on a whim… again, her actions in this issue seem be a device to move the story forward and not a reflection of her true character.

Finally, I’ll move onto this issue’s most glaring error.  If you plan on picking this issue up, be prepared for a lot of reading.  And before I begin laying into Tynion a bit more here, please do not misunderstand me – I LOVE to read.  I’m sure you are the same way.  If it is really well-written and worth our time, give us thousands of pages and we will spend days, even weeks, blissfully giving an author our full attention.

The problem here is that Tynion is working with a medium – COMICS – that can, and must, be used to tell stories visually.  The images should add to the story, add to the mystery, but Tynion is so busy telling us what’s going on through narration boxes and character exposition that there is little, if anything, left to the imagination.  And this is becoming incredibly frustrating.  He must grant his narration a quick moment of silence to allow the story to be told through the pencils, inks, and colors instead of incessantly explaining EVERYTHING to us.

In summary, this could be a captivating tale.  But it just isn’t.  Pencils by Emanuela Lupacchino and colors by Romulo Fajardo Jr. are worth tuning in for – the final page is an absolute stunner – but they aren’t enough to salvage this issue.  And I still like the idea of a magic-fueled, out of control Wonder Woman, but the story must service this unique concept, otherwise it’s just a cool idea and little else.  And if I can really nitpick here, Hecate breaking up her power and temporarily housing it outside of herself, only to see it possibly used against her, is awfully reminiscent of the horcruxes in Harry Potter.  But I digress at this point…

Let’s hope the next issue breaks down the walls of unrelenting narration and give us some deep and quiet character moments.  Fingers crossed.  Toes, too. – John Funderburg