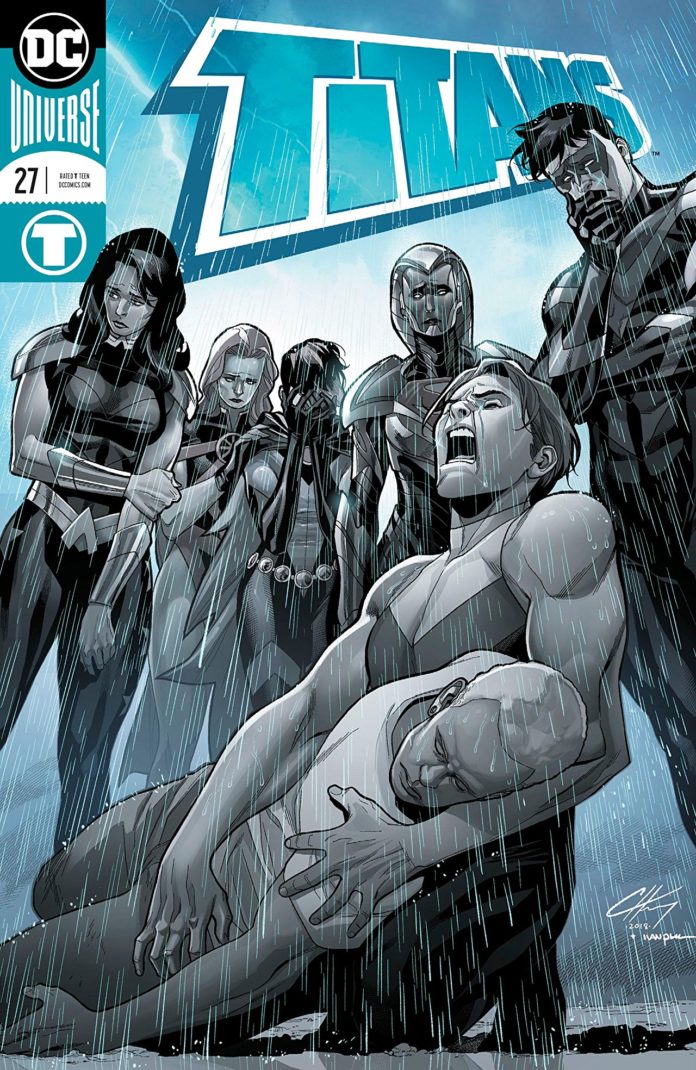 SYNOPSIS: Newly awakened metahuman Ionbound suffers a fateful transformation that rocks the Titans team to their core. If they can’t save these Source Wall victims, what good is their latest mission? But does this development hold the key to helping them? Or is it a harbinger of more death and destruction to come? That’s a lot of questions to answer; good thing there are two issues this month to cover all that ground!

FYI: Spoilers for BATMAN #55 (you can check out the BOF review for that here.)

Nightwing is shot in the head by KGBeast.

Titans #27 takes place before the team knows the extent of Dick’s injuries, we got the heads up from a favorite comic trope of mine: a note from the editor. Everything in this issue happens before Nightwing #50 (look at that, we have a review for that too). The Titans are left to figure out where they go next, without the guidance of their friend, all while processing his unknown fate.

Grief, it ’s what makes this story stand out. Each Titan goes through it in their own way, but the focus is on Donna Troy, Beast Boy, with emotional caps from Miss Martian and Raven.

The issue opens with Donna visiting the grave of Roy Harper and quickly moves to the team learning that Dick has been shot. At Donna’s urging to move past the topic quickly, the first sign of how she is dealing with the potential loss. Ironically, Raven, the resident empath, has been cut off from her emotions. She shares that she wishes she could deal with the emotions that Donna Troy has been trying to run away from. At this point, Donna has lost Roy (Arsenal/Speedy) and Wally (Flash III, see Heroes in Crisis #1), and this has happened to Dick. To have her so clearly trying to run from the emotions of potentially losing three of her best friends, while paired with Raven, who is what Donna wants to be in that moment: emotionless. It was a great scene capped off by the two embracing, showing that their two opposite ends coming together, that will be mirrored later.

Meanwhile, Beast Boy brings up Tyler Baines, the first emergent event handled by the team, who is the conduit for the rest of the team’s emotional struggles. Baines is given a few hours to live and Beast Boy thinks it is the team’s responsibility to help him, since they promised they would.

Beast Boy is taking the news about Baines particularly hard. He sees himself in Baines, since he has unwanted emergent transformations. He is also uncertain of the Titans future without Nightwing. He shares that thought with Steel, and later the rest of the team. Miss Martian, the de facto leader, will not accept the risk of a potential remedy. It is through Donna’s insistence that Nightwing would bet on his friends and making it clear that the Titans are his friends, that gets Miss Martian to relent. In that moment, Ms. Martian is also grieving for Nightwing, but has felt isolated from the rest of the team, which leads to another embrace as Beat Boy hugs her. The two embraces show the team coming together as they process their feelings and form bonds with one another. It is these moments that make this feel like the team will get some well-deserved good news.

The team beings the procedure to save Baines, and it fails. What looked to be a moment that could give the team a little hope about their friends ends up pushing them further into their grief. I fully expected the team to pull off the impossible, and save Baines, but this felt more real. We’re used to our heroes winning, and taking unexpected blows and coming right back, but that’s not how life works. Dick was taken from the unexpectedly. Baines was given a terminal diagnosis that they couldn’t overcome. The whole team is dejected and in mourning, and that feels real. Now, does this push them further apart, or bring them closer together. We will find out soon, and I can’t wait to see what happens. – E. Chad Metz