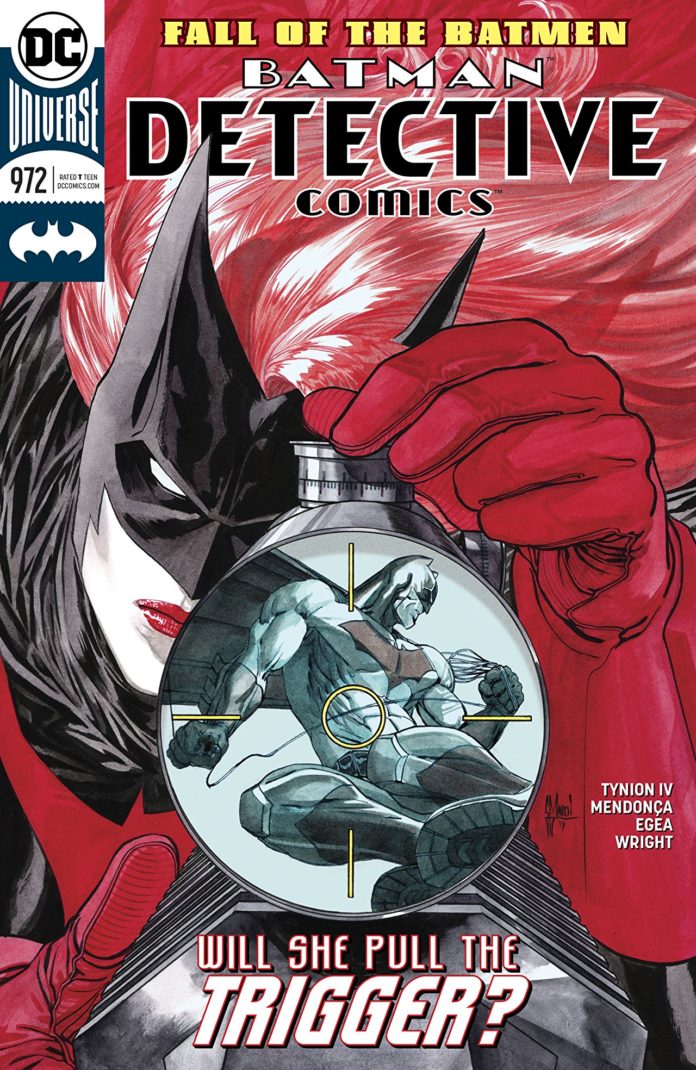 SYNOPSIS: “FALL OF THE BATMEN” part four! Batman might have overpowered the Victim Syndicate, but they had one last surprise for him: a secret weapon that’s made one of his strongest rogues nearly unstoppable!

Detective Comics #972, the fourth part of “Fall of the Batmen” has established that the First Victim is a foe as formidable as we have seen in Gotham.  James Tynion is inching us closer to the conclusion of the story that very well might tear the Bat-family apart. The Victim Syndicate is forcing Batman’s hand while the public has seemingly lost all faith in him.

The Victim Syndicate has reverted Clayface to his unstable ways, using his fear and frustration to turn on those who have taken him in. This current adaptation of the character has been presented as Ben Grimm like, but recently he seems to have more in common with Amadeus Cho/Hulk. In the sense that they are both aware of what the other is doing mentally but only one can be in control of the physical form. Tynion’s dialogue between Batman and Clayface shows that even though Clayface has taken the driver’s seat, Batman has faith that Basil can and will pull through.  The Rebirth Batman is way more compassionate than what we are used to seeing.  While I did enjoy how Clayface “escaped” using Batman’s training against the Dark Knight. It was kind of a bummer to have Clayface spill his plan in a monologue like scene as most villains tend to do. I would have appreciated a bit of detective work like what we saw in Batman 38.

Tynion magically builds tension and heightens emotion at an alarming rate, even more so than last issue. Spoiler is seeing the future Tim Drake show himself right before her eyes, the downfall between Red Robin and Batwoman, Dr. Victoria October doubts her cure and Orphan’s issues with her best friend’s rampage. The First Victim has pitted the Bat-Family against each other by turning Clayface against them.  In a story that has been filled with wonderful and tragic moments comes one of the better emotional pages in this run.  With no one seemingly able to stop Clayface in a fist fight. Orphan tries a different approach, without the mask just Cassandra to Basil.

Miguel Mendonca returns for the interior artwork on the book.  Mendoca’s Clayface is truly a terrifying monster. With skulls on his shoulders and the mouth of a Xenomorph this is one of the more horrifying takes on the character in Rebirth.  The fight scenes in the book are poster material; Clayface vs. Batman in the Asylum was magnificent.  The scene where Batman gets thrown in the evidence room has tremendous nods to Gotham’s rouges gallery, Riddler’s cane, Penguin’s umbrellas are a few. My favorite was seeing Scarface just sitting away in storage.

My favorite page in the book might be the first page. A three-panel layout of Batman hiding and Clayface on the hunt, straight out of an 80’s slasher film.  Clayface tearing through the Belfry can’t be forgotten either, starting with his grand entrance followed by magnificent shape shifting cameos.  At times, I felt like I was reading a Freddy Kruger comic.  Like last issue Mendonca really draws some great facial expressions that sell the emotion. The joy on the face of the First Victim, the concern of Dr. October and Orphan, the pain of Basil all take the story and characters to the next level due to the art work.

While there is not a lot of the First Victim in this book his presence cannot be denied.   This plan was thought out meticulously.  The Victim Syndicate sought out the weakest link of the Bat-family and flawlessly exploited Clayface. Not only has the Bat-Family turned against each other now the public is against them as well.  Mayor Akins is breathing down Batman’s neck, riots in the streets of Gotham, his own team separated and dysfunctional.  What else can the Frist Victim do to further cripple the protector of Gotham?  We will just have to wait for the finale of  “Fall of the Batmen” drops 1/24/17, same Bat-time, same Bat-site cool kids, until then. – Peter Verra