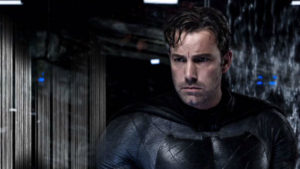 Ben Affleck appeared on JIMMY KIMMEL LIVE and was asked about ending his “reign” as the Batman on film.

“You know, I tried to direct a version of it — worked with a really good screenwriter – just couldn’t come up with a version, just couldn’t crack it,” explained Affleck.  “So,” he continued, “I thought it was time to let someone else take a shot at it and they got some really good people.”

That “really good people” is Matt Reeves who was hired to direct a solo, standalone Batman film after Affleck walked in late 2016.

RELATED: Ben Affleck’s THE BATMAN-It’s a Moot Point (And Has Been)

What Affleck doesn’t explain is even though he couldn’t “crack” the story (I’ve long maintained that he never had a passion for the project, a story to tell, and was doomed from the get-go.  CLICK HERE to read my take on that.), why didn’t he simply continue to play Batman?

The answer to that is that neither he never planned to be an ape on the F’ing ground for Matt Reeves.