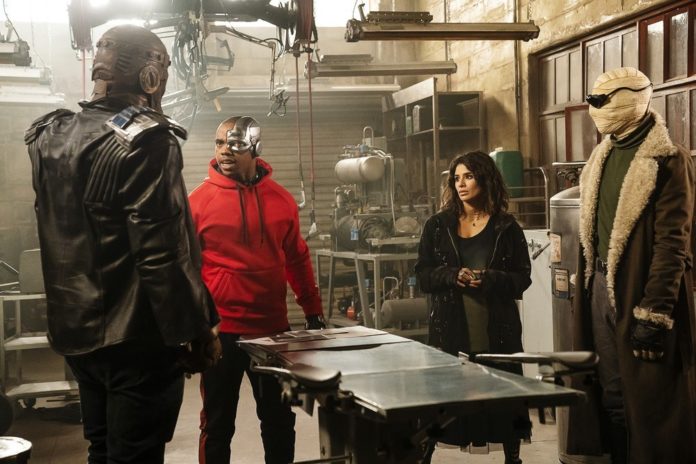 S1/E3 “Puppet Patrol” Synopsis: The Doom Patrol set out for Paraguay where they discover the Nazi doctor who created Mr. Nobody and the connection between The Chief and the two villains.

Through two episodes of Doom Patrol, we’ve seen a town sucked into a black hole, the team travels down the throat into the stomach of fart messaging donkey, and that same donkey regurgitate the town back up to what it was before.

The mastermind behind all of this is the mysterious Mr. Nobody, who has also kidnapped the beloved Chief (a.k.a. Dr. Niles Caulder) and has him captive in Paraguay.

Or so the team believes.

In order to get to Paraguay, the team embarks on a two-week road trip, filled with constant bickering and shared hotel rooms.  The closeness seems to bring out the worst in everyone, as Cyborg grows increasingly frustrated with the team’s lack of ability to resemble real superheroes while Rita and Cliff try to convince him it’s because they’re not.

When the team unexpectedly gets split up, Cyborg and Rita are left back and are forced to come to grips with their own limitations while Cliff, Crazy Jane, and Larry are taken to Fuchtopia, the Nazi home of the doctor who created Mr. Nobody.  The three of them are forced to watch a puppet show which reveals secrets and forces them to react to them.

The real focus here is on Larry Trainor.  This is the first time the onion is peeled back on Larry’s past and we get a look at his struggle to come to grips with looking like the all-American hero and family man, but secretly having a gay affair with one of his Air Force comrades.  This serves as a perfect allegory to his current situation.  Larry is trying to come to grips with the negative spirit living inside him that also has taken over his life.  While he constantly maintains he’s the alpha of their symbiotic “relationship”, the spirit constantly reminds him it’s the other way around.

The episode has some of the trademark craziness we’ve gotten accustomed to during the first two episodes.  Fuchtopia is a place seemingly run by Germans in lederhosen whose sole purpose is to improve people.  That concept alone is both funny and creepy and gives you the same uneasy feeling the show is known for.

The Doom Patrol, however, doesn’t seem fazed by it and because they’re not — and you shouldn’t be either.   We do get plenty of plot building and are also introduced into another classic character from the comics.

Thus far, we had not seen much teamwork being shown by the Doom Patrol, but we get a little bit of that here.

Robotman has an incredible scene of completely losing it when confronted with some Nazis and we finally see just how powerful he is when he wants to be.  We also get more of Crazy Jane’s various personalities and see even more of a reason why she is not someone to mess with.  Couple that with some excellent character building for Larry Trainor and we have an episode that not only advances the plot but goes a long way towards bringing the team closer together. – Eric Holzmann