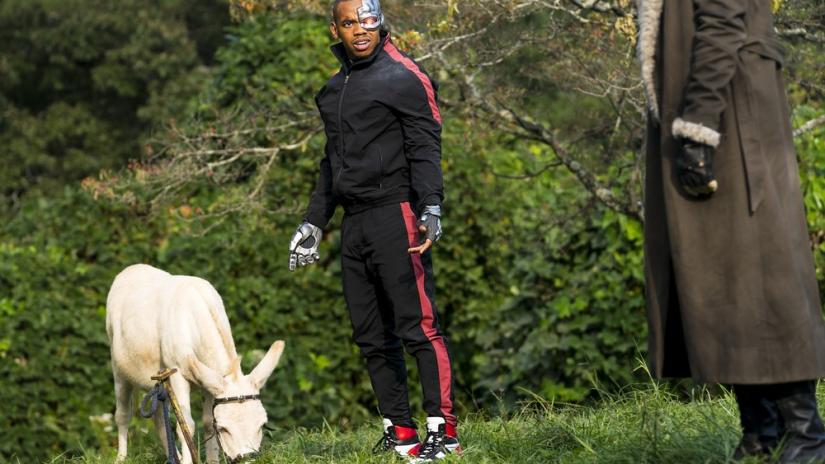 S1/E2 “Donkey Patrol” Synopsis: Following Mr. Nobody’s capture of Niles Caulder and the destruction of Cloverton, Ohio, the Doom Patrol investigates the mysterious albino donkey and discovers it’s a door to another universe, where Mr. Nobody is in control; Cyborg joins the search.

After a zany pilot episode which introduced us to the team, episode two of Doom Patrol takes us deeper…into the stomach of the farting donkey from Episode #1.

Yes, the donkey that farted a message into the sky is also a doorway to another dimension.

But more on that later.

First, we are introduced to Cyborg, a.k.a Victor Stone.  When it was announced he was going to be in Doom Patrol many fans were surprised.  We all know him as being introduced as one of the Teen Titans, so questions arose as to why he was being included in this series and not TITANS.  One of the reasons is because they need to anchor this show to the expanded DC Universe, and including Cyborg is a great way to do it.  We get mentions of the Justice League, Batman, and The Flash which lets us know the world of DC heroes exists in this universe.  The other is the more direct connection he has to one of the main characters on the show.

We all know that Cyborg was created by his father Silas Stone after being attacked by a creature from another dimension, but for the purposes of having this all make sense, Dr. Niles Caulder was involved as well.  A couple of flashback scenes show Victor and Dr. Caulder interacting, and in many ways, it appears their relationship is much more of a father-son one than the one Victor has with Silas.  When Victor learns of Dr. Caulder’s disappearance into the vortex he rushes to Cloverton to help him.

This brings us back to the donkey doorway

I think one of the best things about this show is its ability to keep the absurdity of it going even through the serious matters.  At the end of Episode #1, an entire town is sucked into a black hole like a vortex and disappears with the team trying to stop it.  That entire idea is both crazy and serious, but what’s crazier is we find out rather early on that it ended up inside the stomach of the farting donkey when said donkey regurgitates none other than “Crazy” Jane, who had jumped in after Dr. Caulder to save him.

I know that’s a lot of craziness going on, but you get the point.

Jane is the best character on the show and seemingly is the key to whatever is going on.  Through her multiple personalities, Cyborg and Robotman gain clues to what is going on down the donkey’s throat with Dr. Caulder.

Using Rita’s ability to stretch herself they send her down the gullet to see what’s going on only for her to get sucked in, along with Cyborg and Negative Man when the attempt to pull her back out.

They land in an alternate universe being controlled by Mr. Nobody who once again reveals through various flashbacks and torturous scenarios that he is in control of all their lives and to spare their torture they should stop trying to look for Dr. Caulder.

At the same time, Robotman’s desire to redeem himself as a father by caring for Jane is triggered by her various personalities. He is trying to be the father to Jane he never was for his own daughter.

All of this culminates in a final scene with our heroes fully accepting who they are and deciding how they are going to move on.  They all know they have abilities that they can use to help people and make a difference in the world, but first, they have to use them to find out who Mr. Nobody is and save Dr. Caulder.

That’s where we are heading next. – Eric Holzmann

BATMAN BEYOND #26 Review by Matt Whaley